Department of Cooperation, Government of Kerala > About Cooperative > Organisational Setup 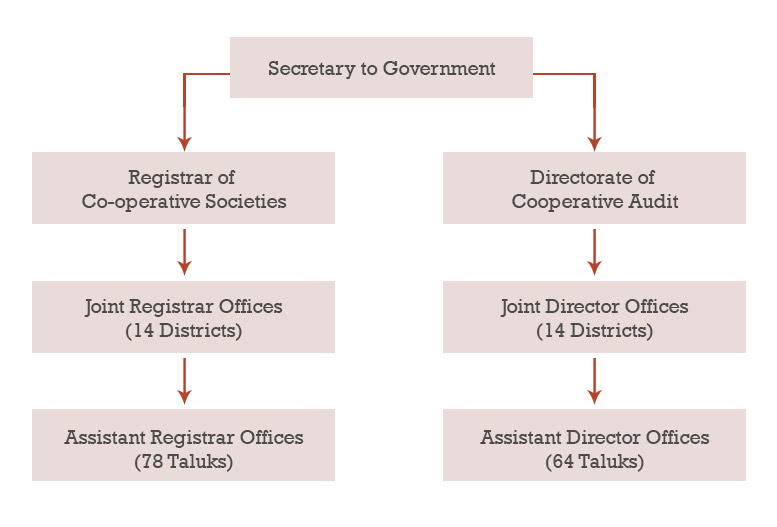 One Deputy Registrar of Co-operative Societies is working as intermediatery officer of the ICDP Section in the headquarters.

In head office there were 22 sections. They are:-

The Statistical Wing is manned by the staff from the Department of Economics and Statistics.

A Co-Operative vigilance office is constituted to investigate all cases of misappropriation, corruption and major irregularities in Co-Operative societies. It is headed by DIG of Police assisted by three DYSPs, three C.I.s and police constables.  It has three zonal offices at Alleppy, Thrissur and Kannur. The Office of Co-Operative Vigilance Officer is in charge of a Joint Registrar of Co-Operative Societies.

One Assistant  Registrar of Co-operative Societies is working as Liaison Officer attached to the Joint Registrar (General) Ernakulam, to liaison the work with the Advocate General in respect of O.P s filed before the Hon.  High Court  of Kerala.

Services of 9 Deputy Registrars of Co-operative Societies and 23 Co-operative Inspectors are rendered to the State Co-Operative Union for working as Principals and Lecturers respectively in the 9 Co-operative Training Centers run by State Co-operative union on free services.

A vigilance wing is functioning in the Department and 1 Deputy Registrars all over the state look after/conducts Inspections in the Co-operative Societies.  A part from this an inspection cell headed by two Deputy Registrar constituted for Inspection mainly in Apex, central and Urban Banks.

A Co-operative Tribunal is also functioning as an appellate authority on the awards issued by the Departmental Arbitrators. The Tribunal is appointed from the judicial service and should be a judge not below the rank of District and Session judge.

Government vide GO (P) 1/03dt. 02.01.03 had constituted Co-operative Arbitration Court headed by one presiding officer to hear and dispose all Non-Monetary disputes in the state.

A Co-operative Election commission constituted vide G.O (Ms) 109/01/co-op DT. 9.11.01 the Head quarters at Thiruvanamthapuram for conducting election in the credit co-operative societies in the state.